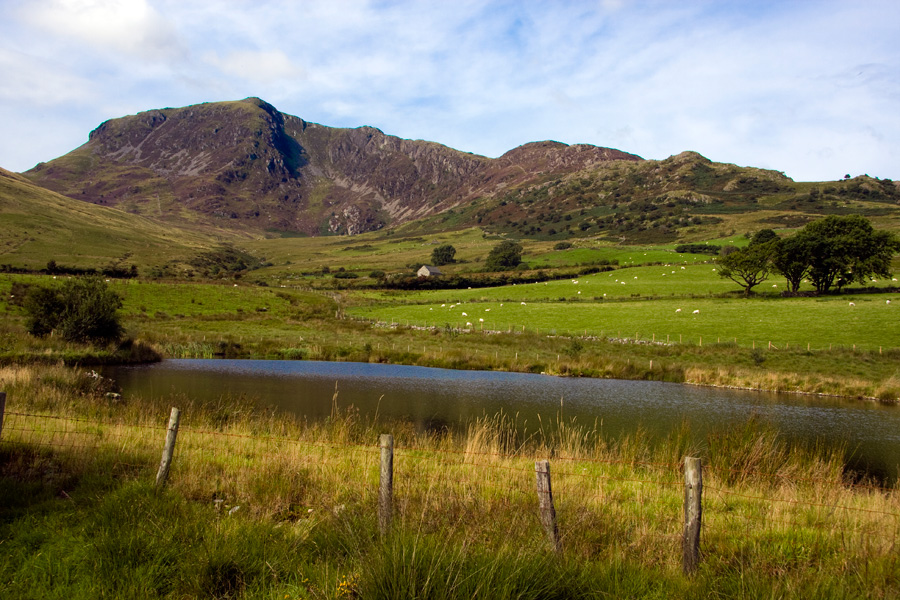 Cadair Idris, or to use its anglicised title of Cader Idris, derives its name meaning ‘Chair of Idris’ from the giant warrior poet of Welsh legend.

The mountain looms menacing and primeval over the surrounding landscape. Cadair Idris consists of a massive 11km long ridge and although only the 19th highest mountain in Wales, is the second most popular mountain in the country after Mount Snowdon.

The summit, Penygadair (Top of the Chair) at 2,927 feet (892m), offers a superb panorama of mountain scenery. The mountain is notorious for its low cloud but on a clear day it is possible to see the mountains of the Snowdon massif and the Rhinog mountain range as well as the Lleyn Peninsula and the hills of Shropshire, the Long Mynd, the Wrekin and occasionally Ireland.

To the north of the summit lies the very steep and craggy north face, where the cliffs drop around 200 metres. The other peaks of the ridge are Mynyyd Moel (855m), Pen-y-Gader (893m) and Mynydd Pencoed (798m).

The mountain consists of a long ridge, its northern face is craggy and precipitous, in contrast to the south face which slopes more gently into the broad expanse of the Dyfi estuary. There are a number of paths which lead to the summit, the Minffordd path is leads directly up from Talyllyn side of the mountain, it  has its own car park for your convenience.

From the car park behind the Minfford Hotel (OS grid ref. SH732115) follow a track leading north. After the visitor centre follow the path uphill through the woods. When reaching a level area turn west following the path to the summit of Craig Cwm Armach. From the summit, cross a stile and head downhill. Follow the edge around top of Cwm Cai, rising up to Pen-y-Gadair  –  Further Information & Route Guide

Permanent link to this article: http://ffermcedrisfarm.wales/things-to-do/cader-idris/